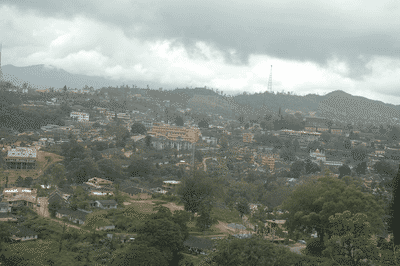 Madikeri is the picturesque capital of Kodagu (also called Coorg). It is the land of coffee, cardamom, colonels, and the river Cauvery. The capital of Kodagu district is located in a beautiful hilly setting surrounded by the forested slopes of the Western Ghats. Here, time seems to have stopped. Dotted with a cluster of red-roofed dwellings and a bustling bazaar, the town, situated at an elevation of 1525m, has a charming old-world look. Madikeri provides access to some excellent picnic spots too.

The 19th century Madikeri Fort with its stone ramparts now houses the prison, a temple, a chapel, a small museum, and assorted government offices. 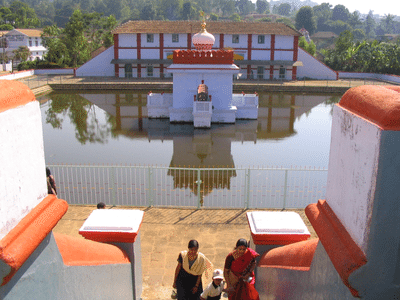 The temple is built in the Islamic and Gothic style of architecture with a dome in the centre, comprising four turrets in as many corners. The Raja got the history of the temple inscribed in a copper plate at the entrance of the temple. It was built by Lingaraja II, ruler of Coorg in the year 1820. The ‘Shiva Lingam’ installed here is said to have been brought from Kashi. 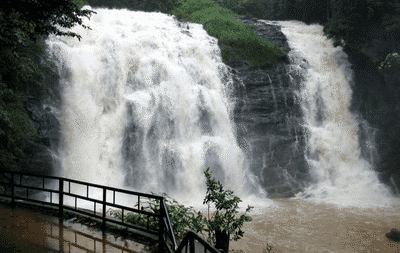 6 Kms away from Madikeri, tucked away between private coffee and spice estates. Abbey Falls offers a splendid backdrop for picnics. As you make your way past stocky coffee bushes and tall trees entwined with pepper vines, the falls make a sudden and dramatic appearance as they cascade their way down steps into limpid pools to join the river Cauvery. 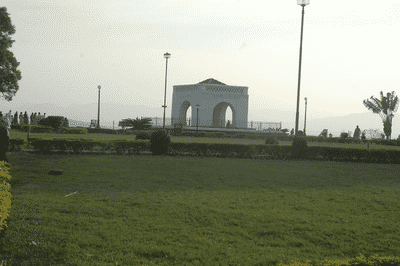 It is an enchanting picnic spot with a swathing in the nature’s lap. It is sure to enjoy the marvelous sight of Sun set and gorgeous valley and mountain ranges. The former Rajas of Kodagu along with their consorts used to visit the place to savour the beauty of the nature here. Musical fountain has been attracting a large number of visitors to the garden.

Located in the northern extremity of the Madikeri city, Gaddige has two identical square structures, which are the tombs of the Rajas and their queens. They are situated close to each other built in Indo-saracenic style.

40Km from Madikeri. This is the confluence of three rivers: Cauvery, Kanika and Sujyothi. Among many small shrines dedicated to various gods, the Bhagandeshwara temple, standing in a large courtyard surrounded by Kerala-style temples is the most impressive. Bhagamandala is known for its apiaries and Kodagu honey. 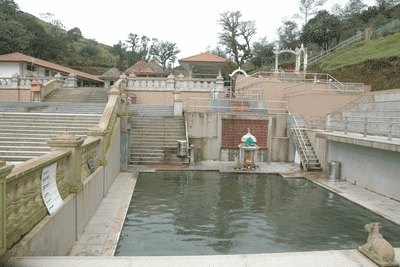 48Km from Madikeri. Talacauvery also known as DakshinaKashi is the famous birthplace of river Cauvery at the foot of the breathtakingBrahmagiri Hills in Coorg. The river flows down inconspicuously as ‘Guptagamini’ from here before re-emerging a small distance downward at Nagateerta. On Tulasankramana day (Oct.17th) thousands of pilgrims flock to the river's birth place to witness the miraculous rise of the fountainhead, when water gushes up from the spring at a predetermined moment. A Long flight of steps lead one upwards to the peak of the Brahmagiri Hills at Talacauvery from where a panoramic scene of nature unfolds.

35Kms from Madikeri and 15 Kms from Kushalnagar. The reserve forest is famed for its amazing variety of avian fauna, an elephant training camp and angling possibilities on the Cauvery. Elephant interaction in the morning time is the popular activity attracts hundreds of tourist daily. Best time to be there for elephant washing and interaction is at 08.00hrs in the morning. 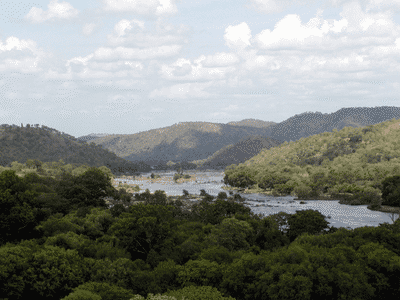 It is a breathtakingly beautiful riverine island carved by the Cauvery River in the plains, 25 Kms from Madikeri. It can be accessed by traveling over a hanging bridge. Nisargadhama teems with lush foliage, thick bamboo groves, teak, and rosewood. The sprawling 64-acre nature resort has a deer park, orchidarium, and elephant and boat rides.

One of the largest Tibetan settlements in South India. It is known for its monasteries, handicrafts, carpet factories, and an incense factory. The landscape is dotted with several monasteries, the main ones amongst these are the Great Gompa of Sera Je and Sera Mey. The Mahayana Buddhist University is located at Sera. It also has an enormous prayer hall. The other important monastery in the neighbouring settlement of Bylakuppe is Tashilhunpo Monastery, renowned as the seat of Panchen Lama.

The Golden Temple in Bylakuppe is an impressive monastery setup besides number of other monasteries, nunneries and temples in all the major Tibetan Buddhist traditions. It is a must visit place in Coorg though it is in Mysore district. The place is very peaceful and charming a must visit place while in Coorg.

It is located near Hudgur village, 9 Km away from Kushalnagar. The reservoir is formed by a masonry dam built across Harangi River, a tributary of Kaveri River.

35Km from Madikeri. Located near Kushalnagar on the banks of the river Cauvery is the Valnur Fishing Camp, where avid fishing enthusiasts can indulge in the luxury of angling for Mahseer. Fishing permits can be obtained from the Coorg Wildlife Society. Valnur is also a heaven for birdwatchers, with innumerable avian species to be spotted and identified.

Nestling besides the Rajiv Gandhi National Park (Nagarhole) and 85km from Madikeri, Iruppu Falls presents a stunning sight during the monsoon. From its humble origins in the Brahmagiri Range, the falls plunge down 170ft. in two distinct stages. The never-ending music of the falls and the hush of the surrounding densely wooded forest make this a great picnic spot. The Rameshwara Temple, Located close to the LakshmanaTheertha River, attracts a large number of pilgrims during the Shivaratri festival. A forest trial leads from these falls to the Brahmagiri Peak in Southern Kodagu.

Explore the environs of Nagarhole, (Snake River). 90Km from Madikeri. The Rajiv Gandhi National Park derives its name from the winding course of the river that flows through the forests. Nagarhole has an astonishing abundance of wildlife, especially the Asiatic elephants. The backdrop of the distant misty blue Brahmagiri Mountains, the natural sounds of the jungle, the gurgling of streams and rivers, and the twittering of the birds make Nagarhole a memorable experience.

For those who have head for heights, Tadiyendamol, the tallest peak in Kodagu, is a paradise. On a clear day you can view the distant Arabian Sea and the enchanting beauty of the whole of Kodagu from here. Situated in the heart of the Tadiyendamol range, in the village of Yavakapadi, Naalkunaadu Palace was constructed by Dodda Raja Veerendra, the king of Kodagu, in1792. The palace, with beautiful carvings, tells many a tale of yore. It is now being used as a camping site for trekkers. Kakkabe, a small town 35 km from Madikeri, gives access to the highest peak in Kodagu. Nearby PadiIggutappa is the most important temple in Kodagu.

Located in idyllic surroundings the lake abuts cliffs, mountains and interspersed with coffee plantations. This lake is considered holy amongst the local community situated in Doddamalthe near the village of Sulimalthe, 6 km away from Somwarpet town of Coorg It is the biggest lake in Kodagu. The sanctity of the lake can be gauged by the annual GowriHabba (festival), wherein after the pooja the belongings of the goddess Honamma is presented to the lake in a very symbolic fashion. The legend goes that GodessHonnamma is said to have sacrificed her life for the well being of the local tribe, and thus the temple came into existence.

The Nilakandi Falls are located the midst of the dense tropical forests of Coorg and trace their source somewhere in the Thadiyandamol range. It is possible to cover on foot both the Thadiyandamol hills and the Nilakandi falls during the same leg of the journey. The route to the falls in gradual and gentle. The landscape is indeed picturesque and serene. The waterfall that lends trekkers a wonderful waterfall shower experience, as the height of the water fall is just comfortable to have a shower !

Travelling in a North Easterly direction for about 40 Kms is a small hamlet called Somwarpet. The place by itself is mesmerising because of its natural beauty. Gently rolling meadows with abundant greenery adds to the beauty of this attraction. Many coffee plantations can be seen in the vicinity, giving the attraction a very picturesque look.

This sanctuary is located in Somwarpet taluk of the Kodagu district. An ornithorologist will be able to spend endless time drowned in the hobby of watching bird life. Many rare and endangered birds have found a home in this sanctuary. The Kadamakkal reserve forest is a part of the sanctuary. Pushpagiri (Kumara Parvatha) is the highest peak in it. The sanctuary adjoins Bisle reserve forest to the north and KukkeSubramanya forest range to the west.

The Pushpagiri Wild Life Sanctuary has been proposed to be included as a heritage site.

These falls are located at the base of the Pushpagiri Hill Ranges. The exact location of the falls is in Bettadahalli Gram Panchayat of Somwarpet. The falls is a result of dripping of River Kumaradhara from the peak of Pushpagiri Hills. These falls roll down over a height of 200 feet.

The best part of the visit to these falls is as the general landscape gently rolls down through meadows, it is an ideal trekking route. The experience of a trek is both interesting and enjoyable. An added precaution during the monsoons is leeches could be found in the area and thus necessary protection is highly recommended.

The Nalakunad Aramane (Palace), is some 45 Kms away from Madikeri town, located close to a village named Kakkabe. Historical evidence suggests that this Aramane was built in 1792, by a Haleri ruler named Dodda Virajendra. It is generally belwived that the ruler married his lady love Mahadevammaji in this palace.Just to escape from the clutches of Tippu Sultan then a powerful ruler of Mysore, this aramane had underground cellars to avoid detection from Tipu’s troops.

Also during the British invasion, the royal Haleri family Chikkaveera Rajendra took shelter in these underground cellars. The architecture in the palace is impressive as even during those times, paintings and carvings adored the walls of the palace.